One of the most unsatisfactory areas of town planning from the point of view of the ‘consumer’ of planning services is outdoor advertising. The negative attitude of planning authorities and the unsympathetic approach of the Planning Inspectorate to advertising appeals is immensely frustrating.

I have acted in several cases involving large banner adverts on buildings which are either awaiting demolition or are undergoing reconstruction or major refurbishment. Temporary banner advertisements, displayed for no more than 12 months at most, would be a great improvement on the appearance of such sites and would brighten up the townscape immensely. Yet time and again planning authorities set their face against any such display.

What prompted these thoughts (and a letter which I wrote to Planning magazine at the time) was a heartening example of a more enlightened approach which I came across a couple of years ago on an all too brief visit to Venice (which as I am sure everyone knows is a World Heritage Site). The Doge’s Palace was undergoing major refurbishment, and the scaffolding and safety shrouding was hidden by a large advertisement display. Another large banner advertisement was similarly displayed on the loggia facing the Doge’s Place in the Piazzetta. Obviously these displays were only temporary and, as soon as the repairs and refurbishment were completed, the advertisements were no doubt taken down so that these important buildings can once again be seen to full advantage.

The point is that, in the meantime, there was clearly no objection to a temporary advertisement display on the buildings while they remained shrouded in scaffolding. Clearly the Italian authorities were satisfied that a temporary advert display of this nature is perfectly acceptable, even in a World Heritage Site such as Venice. So what earthly justification can there be for English cities resisting similar temporary displays on buildings in their city centre? 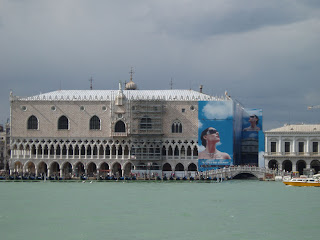 In writing this, I appreciate that the large banner adverts in Venice were somewhat controversial, although it was well-meaning (but misguided) British-based 'conservationists' who were kicking up most of the fuss.

The plain fact is that banners hide eyesores. While a building either stands empty awaiting demolition or is covered in scaffolding and netting as the cladding is stripped off or other work is carried out on the building, the result is an eyesore which does nothing to enhance or improve the townscape. In such cases, banner advertising to hide such eyesores is an attractive alternative, which will liven up the townscape for a short time until the building works are completed. The essential point is that such a banner display is necessarily temporary, and will be removed as soon as the scaffolding is taken down from the building in question. 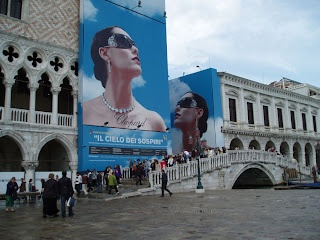 There was a prime example in Bristol a few years ago. A life-expired office block was being converted into a hotel. The works involved the building being stripped right down to its bare bones, and it looked awful. Clients for whom I acted sought to erect a visually striking banner display which would have been a great improvement on the ugly skeleton of the building while it was being gutted and refurbished, but their efforts were ultimately frustrated by the attitude of the LPA, despite an earlier grant of Advertisement Control Consent.