(Fourth in an occasional series)

As I have pointed out on several previous occasions in this blog, there seems to be an unreasoning prejudice in this country against outdoor advertising. Whatever one may think of the overall control of advertisements regime, one aspect that particularly irritates me is the extreme reluctance of some local planning authorities (in fact, I suspect, a majority) to countenance large banner adverts on shrouded buildings while they are in course of demolition, reconstruction or repair.

I have in the past acted for one or two of the companies engaged in this type of advertising, but I am not currently retained by these clients and so I have no professional or commercial axe to grind. I simply think that this type of advertising can be beneficial, both as a means of hiding an eyesore while the building work is in progress and in helping to finance the restoration of the fabric, not to mention brightening up the townscape for a time.

Other countries do not seem to have the same hang-up with this type of advertisement display that we have in the UK. I have previously illustrated examples from both Paris and Venice, where large banner adverts have been erected around outstandingly important buildings in the most sensitive of settings – the point being that if such temporary advert displays are accepted by the authorities in those locations, then there can be no justification for resisting such displays on Grade I listed buildings located in a World Heritage Site in this country or in the most outstanding of conservation areas, and of course on many less important buildings in less sensitive environments.

I previously drew attention to a shroud advert in the Place Vendôme in Paris, and I found several further examples on my latest visit to Paris this year. The first of these is in the Place des Vosges (originally the Place Royale) in le Marais (the 4ème Arrondissement), one of the earliest town squares in Europe (if not the earliest) – completed in 1612. Cardinal Richelieu lived here from 1615 to 1627, and Victor Hugo’s house in the south-east corner of the square is open to the public. 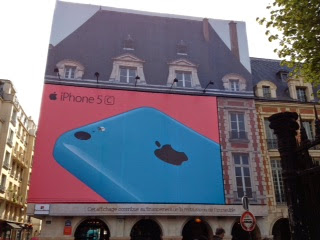 The banner advert here is at the north end of the eastern side of the square, next to the junction with the rue du Pas de la Mule. As the rubric on this and the other advertisements illustrated here clearly states: “Cet affichage contribue au financement de la restauration de l’immeuble.” Précisément!


At night this advert is externally illuminated, as seen in the next shot. 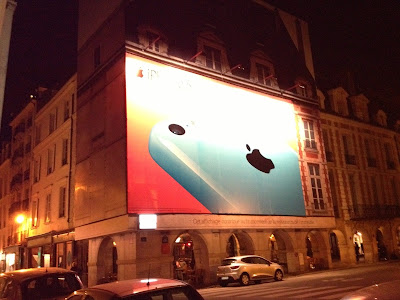 An even larger banner advert is to be seen on the south front of the range of public buildings that house le Palais de Justice, le Conciergerie and Sainte-Chapelle on l’Île de la Cité (in the 1er Arrondissement). This advert fronts onto Quai des Orfèvres and le Pont Saint-Michel. 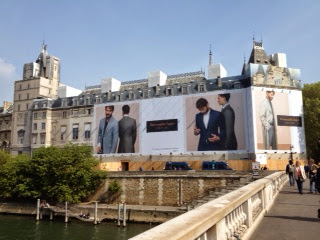 A third example can be seen at the junction of rue Auber and rue Scribe (in the 9ème Arrondissement) immediately opposite the monumental Opéra Garnier. There is a good view of it from the roof terrace of les Galeries Lafayette (as shown in a second photo below). 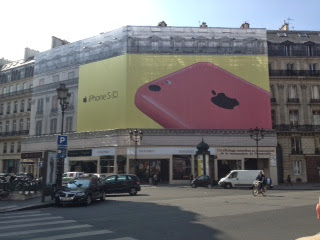 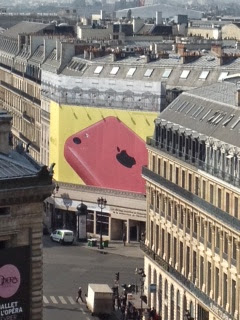 In these various shroud displays, the advertising material does not cover the whole of the shroud, so there is also a representation of at least part of the building façade in these displays, which gives an indication of the structure of the building lying behind the shroud.

The three examples illustrated here are representative of the type of banner adverts on shrouded buildings that are clearly acceptable in such cases, even where heritage assets of the highest value are involved, in very sensitive locations. The essential point is that these displays are by their nature temporary and, as the displays illustrated here explicitly state, they contribute to the funding of the restoration of the building (as was clearly also the case in the examples from Venice to which I drew attention in earlier posts).

It seems that LPAs (and even the Planning Inspectorate) remain very reluctant to grant advertisement control consent for such displays, and so the only sensible course of action would be to amend the Control of Advertisements Regulations so as to grant deemed consent to these displays. Planning ministers have shown great enthusiasm for cutting through red tape in the planning system, particularly through the medium of extended permitted development rights, and so an amendment of the Control of Advertisements Regulations ought perhaps to commend itself to Eric Pickles and Nick Boles.