If you are a follower of this blog, you may remember that I posted an item on 13 February this year [“Large banner adverts on shrouded buildings”]. The gist of this piece was that large banner adverts serve to hide the ugliness of scaffolding when a building is under repair.

I illustrated this with some photos I took showing the Doge’s Palace in Venice a couple of years ago, the point being that if this is acceptable (on a purely temporary basis) in a World Heritage Site, then there really ought to be no difficulty in allowing such displays in British towns and cities when buildings are ‘in splints’.

No doubt the work on the Doge’s Palace and the Bridge of Sighs has now been completed and these buildings have been restored to their full glory, sans banner advertisements, which were only ever going to be temporary and did not therefore justify the squeaks of protest from mainly British-based ‘conservationists’. The Italians clearly have a much more common-sense approach to these issues.

In April of this year, I came across another example in the Place Vendôme in Paris. Again, this was a purely temporary display on a building undergoing works on the south side of the square. Now I don’t know the precise heritage status of the Place Vendôme, but it must be pretty high, bearing in mind that it is a very early example of this type of urban development and was designed by the Sun King’s royal architect, Jules Hardouin-Mansart in 1680, but the Parisian authorities are clearly prepared to take a similarly common-sense view in such circumstances. Again, the display is no doubt purely temporary, and the adverts will come down when the scaffolding is taken down. 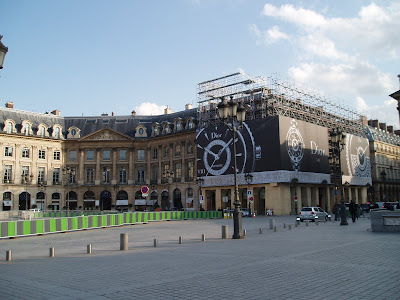 So please can British planners stop taking such a precious attitude to advertisement control, and allow these temporary banner displays (even in conservation areas and on or near listed buildings) while buildings are festooned in the detritus of scaffolding and other equipment when undergoing major repairs or other building work.