(Third in an occasional series)

I drew attention in two previous posts to large banner adverts displayed in Venice (Monday, 13 February 2012) and in Paris (Tuesday, 7 August 2012). The point of those two posts was that even in very sensitive locations, in terms of the historic townscape, the authorities in those cities are prepared to allow the display of banner adverts on buildings which are shrouded during the execution of repairs and maintenance. Bearing in mind that such advertising displays are, by their very nature, temporary, there can be no serious objection to such advertising to hide the paraphernalia of building work and scaffolding. Where the work comprises conservation of the historic fabric, the advertising revenue could even contribute to the cost of restoration.

The essential point I was seeking to make, is that if the city authorities in Venice are prepared to allow such temporary banner adverts in a World Heritage Site, such as the Piazza San Marco or, if the City of Paris is happy to allow them in the Place Vendôme, then there really can’t be any objection to similar short-term adverts in this country, even in conservation areas or World Heritage Sites, where they serve to hide the detritus of building work. And there certainly can’t be any objection to such advertising in the average and often undistinguished town centres of many English towns and cities. 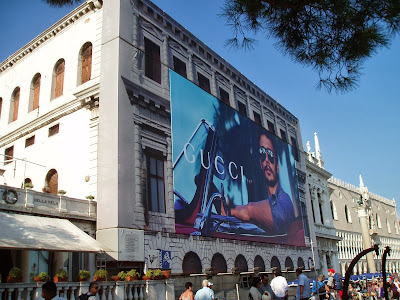 I visited Venice again a month or so ago and, as I had expected, the Doge’s Palace is now visible in all its glory, sans advertising, as is the Bridge of Sighs, which had been similarly hidden from view on my last visit. The east front of Sansovino’s Library, facing onto the Piazzetta is also now free of advertising, but restoration work is continuing on various other parts of the Palazzo Reale, and so banner adverts are currently displayed over the shrouding on the south front of the Zucca (facing onto the Mole) and also at the west end of the Piazza San Marco (the range added to the palace by Napoleon, and now forming part of the Museo Correr). The accompanying photos illustrate these adverts. 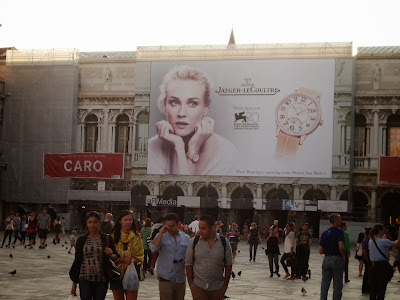 [The “Caro” adverts on the façade of the Museo Correr would probably have been there anyway, as they were advertising a display in the museum of sculptures by the British artist, Anthony Caro, which was part of the Biennale.] 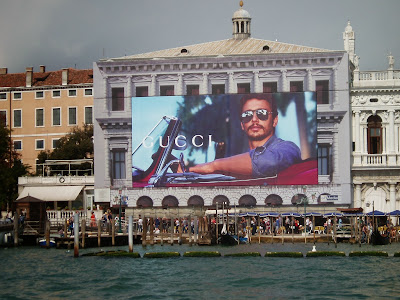 I doubt whether we will ever overcome the precious attitudes of town planners in this country to outdoor advertising, and so the only practical way of ensuring that banner adverts can be displayed in future on buildings under repair (or awaiting demolition, such as the late unlamented Tollgate House in Bristol), without being obstructed or frustrated by over-zealous town planners, is to amend the Control of Advertisements Regulations to give deemed to consent to such adverts.

Uncle Eric has demonstrated his enthusiasm for flying flags; so perhaps he should now embrace the joys of outdoor advertising in the same way.